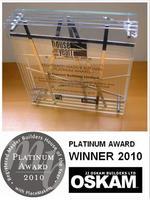 The new award is reserved for builders who have won 5 or more National Level titles within the last decade.

John Oskam said "We are really stoked to have been acknowledged in this way. It is always great to see our consistency and hard work paying off."

The team even had to buy a new bag specifically to transport the trophy back from the award ceremony in Auckland.