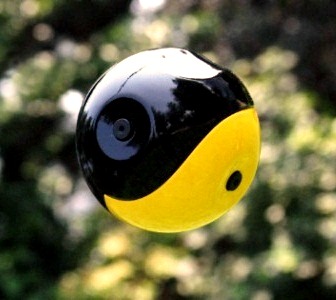 A Boston based inventor has launched a company called Serveball, to help commercialise a throwable camera. The camera is a about the size of a tennis ball and feature four cameras which can capture 360-degree footage while in the air. It is anticipated that among other things the camera could find use in search and rescue missions, giving responders visual coverage where the eye can’t reach.

The ball features cameras on four sides as well as an accelerometer that enables it to detect its orientation. By determining the direction each camera is pointing, the device stitches the images it takes together to provide a panoramic view of its surroundings. Because it also tracks its own spin, the footage can be corrected to provide stabilised, near-static coverage of every angle while in mid-air.

Other anticipated features include transmission of data in real time through a wireless connection to a monitor, night vision or thermal imaging device features.