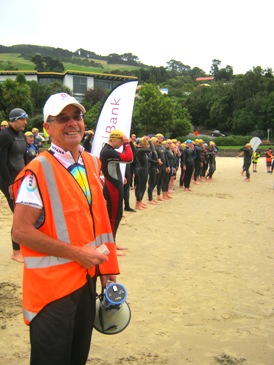 There is a common thread in this person’s contribution to the community.  A love of sport.  Not only a very successful sportsperson himself, he has given his time freely over many years to many sports and helped developed many young  sports people in Otago and New Zealand.

But it’s not all about sport.  As a practising accountant he has shown the same attributes to his clients, his profession ( including local Branch Chairperson) and to his community. This is best reflected in his long serving contribution as a member of the Selwyn College Board and on an advisory committee for Business Studies at the Otago Polytechnic – both activities where he has made a sustained contribution over 20 years.

The common thread between his sport and community interests is that most of what he does is voluntary and in everything he does he is a serious overachiever.

Lindsay Dey’s standards begin as a determined competitor and his achievements include:

Over this time he has progressed from a fanactical runner, to an international athlete who can now also swim and ride a bike!

His success on the track, road, across mountains and waterways and on the sports field are equally matched as a coach and administrator.  Just some of his accomplishments and contributions include:

In his role with Sport Otago and its predecessor Lindsay has played a leading role in first establishing the first regional sporting organisation and then remodelling the platform which defines the strategic and operational standards upon which most regional sporting bodies throughout the country are now based.  It is in this role that his contribution to our community – be it sporting groups, schools, recreation orgainations, local bodies – has had its greatest impact.

It is my pleasure to present Lindsay with a Paul Harris Fellowship tonight, in recognition of his huge and ongoing contribution to sport, the community, business and the Rotary Club of Dunedin South.