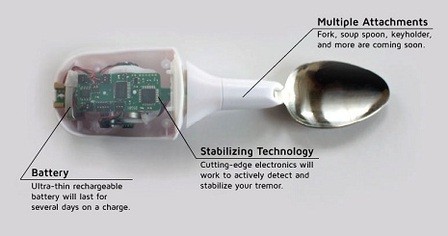 Enjoying a meal can be difficult and frustrating for those with motor disabilities or diseases such as Parkinson’s, which can cause the hands to tremor. Less dextrous people can already take advantage of handSteady, the modified cup that gives less dextrous users more control over the object to avoid spills, and now the Liftware spoon is another product that reduces the effect of hand tremors.

The handle of the device is made of plastic and contains the technology that cancels out the user’s tremors. It features accelerometers to detect the small movements of the hand in much the same way smartphone cameras are able to stabilize photo and video capture. However, the spoon includes motors that can alter the weight distribution of the handle in real time, essentially forcing the spoon to move in the opposite direction of small shakes.

Retailing at USD 295, the spoon is obviously much more expensive that a traditional piece of cutlery, but tests have shown that the device can reduce the effect of tremors by up to 75 percent, which could make dining a much more pleasurable – and less embarrassing – experience for those with motor conditions. Are there other ways to adapt everyday equipment for less able users?