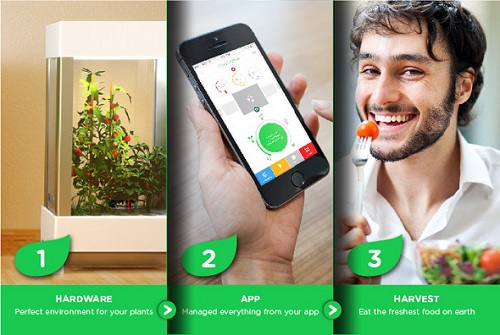 Online crowd funding platforms are becoming more and more common as a platform for entrepreneurs to gather sufficient capital to launch their ventures to the world.

Crowd funding opens up new possibilities. This has been the case for a "local" entrepreneur Aga and her most recent project Niwa (Agnieszka Nazaruk - is actually from the UK, but studied at the University of Otago and one of her start-up ventures is still operational in Dunedin). Niwa is an indoor smart phone controlled growing environment for vegetables and other produce. The team recently launched their project on KickStarter.com to raise money for tooling and further development. To date they have raised over $120K from supporters worldwide, in less than twenty days.

Aga and her team have definitely worked hard to achieve this outcome, with their project featured on more than 50 prominent websites, blogs and publications worldwide. However, it highlights the potential of the global community for business establishment.

Thinking of launching a new venture of your own?

If you are an entrepreneur thinking of launching a new venture or product, there are a growing number of crowd funding options available. Overall, it is clear that preparation is essential for success. If you would like some independent feedback on you venture, to help your chances of success then please feel free to get in touch with our team.

Kickstarter is an obvious first port of call, having successfully raised funds totalling over $1.1 billion dollars for 63,533 projects worldwide. Since 2013 they have also had a dedicated Kickstarter NZ website. It was via KickStarter, that Kiwi film director Taika Waititi was able to self-release his film 'Boy' in the US after raising $100,000 in 2011.

Among many others, some home grown options are kiwi crowd funding platforms Snowball Effect (focusing on NZ equity funding up to $2M) and Pledgeme (over $8M raised for Kiwi creative and social projects since 2008). Both are successful in their own right and markets.

However successful campaigns have been, crowd funding it is not all smooth sailing. Here are a few perspectives from the NZ Herald article. Crowd funding: Go Fund Yourself and another article from the Sydney Morning Herald featuring some pro's and con's might also be of interest.